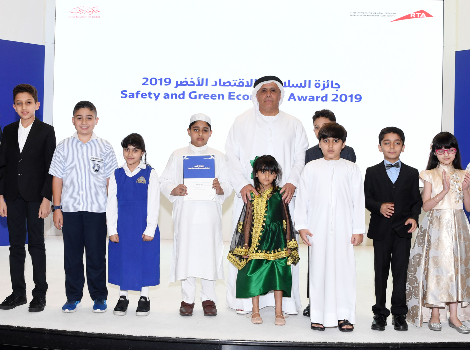 His Excellency Mattar Al Tayer, Director General and Chairman of the Board of Executive Directors of Roads and Transport Authority (RTA), has honoured winners of Safety and Green Economy Awards 2019. The awards are granted by RTA to strategic partners in government departments, service providers, suppliers, contractors, consultants and students as well as agencies and sectors of RTA in recognition of contributions of honourees in support of health and occupational safety, green economy and power-saving practices.

Several directors of public departments, CEOs of RTA and executives of contractor and consultancy firms attended the ceremony which was held in RTA’s Al Wasl Auditorium.

In the safety star award, the winner was Hassani Mohammadi, and the second was Sarvanan Bamraj. In the public transport drivers award, Ahmed Khan Mumen won the best taxi driver category, Syed Imtiaz Ali came second, and Hussein Tikumkara Valabel was third. In best bus driver category, Gurbaksh Singh was the winner, and Abdullah Hussein Ibrahim came second. The best maritime transport operator award was won by Mastaba Mugimathubada.
At the end of the ceremony, Al Tayer honoured members of the two judges’ panels of safety and green economy programmes as well as RTA’s team overseeing the safety and green economy awards.