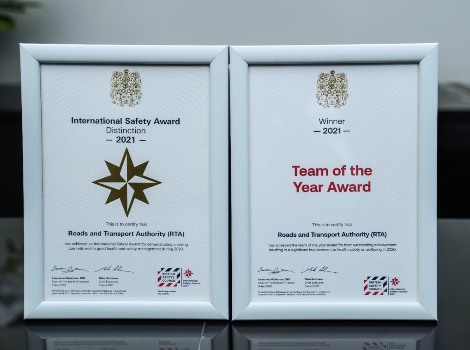 Dubai’s Roads and Transport Authority has been crowned as the one and only overall 'Team of the Year' winner in the British Safety Council International Safety Awards 2021.

From the 292 organisations of all sizes and sectors that won an International Safety Award, including business from the UK, Africa, Asia, India, mainland Europe and the Middle East, only RTA's team succeeded in being crowned overall Team of the Year winner.

The International Safety Award was presented with a Distinction from the British Safety Council in recognition of RTA's commitment to keeping its workers and workplaces healthy and safe during the 2020 calendar year.

RTA is one of the 86 winning organisations that grabbed a Distinction in the International Safety Awards 2021.

Nada Jasim, Director of The Safety, Risk, Regulation and Planning Department of RTA said: “Winning an award is always a matter of pleasure, but it helps us realising our responsibilities and obligations to the next level of commitment and continuing performance. We at RTA are committed to do the possible extent of efforts in terms of keeping our organisation and employees safe and healthy and there is nothing in our business that can override health and safety values."

On the occasion of celebrating 63rd year of establishment, the International Safety Awards recognised the organisations from around the world which have demonstrated their commitment to preventing workplace injuries and work-related ill health during the previous calendar year. The awards also recognised organisations that have shown commitment to wellbeing and mental health at work.

In 2021, 532 organisations applied for the International Safety Award from across all sectors with significant representation from the construction, manufacturing, oil, gas and mining, and power and utility sectors. Winners were drawn from 37 countries worldwide, where 86 organisations won Distinction, 154 organisations won Merit and 147 organisations achieved a pass level.

“The vision of the British Safety Council is that no-one should be injured or made ill through their work – anywhere in the world. Achieving this requires, apart from complying with legislations; people's serious commitment to health and safety as well as workplace wellbeing, impelling others to follow suit," he said.

“The long list of winners of the International Safety Awards, demonstrates that a significant number of companies recognise that effective management of health and safety risks is a business growth enabler, benefiting not just employees, but organisations and wider society. By celebrating the achievements of the 387 winners of the 2021 International Safety Awards and over six decades of improving health and safety standards around the world, we encourage other organisations to adopt this approach and place employees’ health, safety and wellbeing at the core of their business," he explained.