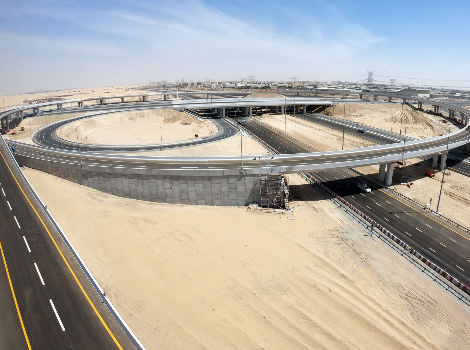 Roads and Transport Authority (RTA) opens Sunday 22 of December 2019 Phase 6 of Roads Leading to Expo 2020 project, including an improved intersection of Emirates and Expo Roads. The project has been undertaken in response to the directives of His Highness Sheikh Mohammed bin Rashid Al Maktoum, Vice-President and Prime Minister of the UAE and Ruler of Dubai, to develop roads and transport networks to support the hosting of Expo 2020 in Dubai. The overall aim is to ensure a smooth traffic flow for Expo visitors, and serve future projects in the area.

HE Mattar Al Tayer, Director-General and Chairman of the Board of Executive Directors of RTA, described the project as one of the biggest road projects currently undertaken by RTA to meet the needs of hosting Expo 2020 in Dubai. He noted that due to the massive scope of the project, it had been divided into six phases, costing about AED 3 billion in total.

“This project phase included the construction of a bridge extending 1.4km and roads stretching about 8 km. Accordingly, the number of lanes of Expo Road have been increased from 4 to 6 lanes in each direction over a sector of 3  kilometres, besides upgrading a 5-kilometre sector of Emirates Road. Works included transforming the existing R/A at the intersection of Emirates Road and Expo Road into a flyover enabling free movement in all directions. Expo Road has been elevated to make a bridge of 4 lanes in each direction. Service roads, each of two lanes, have been constructed on both sides of the main road. Turns have been provided to ensure smooth flow of traffic from Emirates Road in the direction of Abu Dhabi and vice versa, and from Expo Road in the direction of Sheikh Zayed bin Hamdan Al Nahyan Road. The project wil ease the traffic movement from Jebel Ali-Lehbab northward to the Dubai-bound Emirates Road, and from Expo Road southward to the Abu Dhabi-bound Emirates Road,” explained Al Tayer.

“The project works also included transforming the previous R/A at the intersection of Emirates Road and Expo Road into a flyover ensuring free traffic in all directions. Accordingly, the road capacity increased from 10,000 to 23,700 vehicles per hour. It will also improve the traffic flow to Expo, Dubai South and Al Maktoum International Airport, besides slashing the transit time as a result of removing the R/A, and the traffic signal. It will also treble the vehicular capacity of the road and ensure smooth traffic flow on main roads.

Roads Leading to Expo Project have been split into six stages, costing about AED 3 billion all combined. Besides Phase 6, which will be opened tomorrow (Sunday), and Phase 3 and 4, which had been opened earlier this year, work is currently underway in Phase 1, 2 and 5. Phase 1 and 2 cover transforming the existing R/A at the intersection of Sheikh Mohammed bin Zayed Road and Expo Road into a flyover; ensuring free traffic movement  in all directions.

Works underway include constructing direct entry/exit points to Expo 2020 from Sheikh Mohammed bin Zayed Road to ensure smooth traffic flow to and from the site of Expo. The total length of roads being constructed under both phases is about 43 km.

Phase 5 include constructing bridges extending 2.6 km and roads spanning about 3 km. The number of lanes of Expo Road increased from 3 to 6 in each direction over a sector of 3 km together with service roads to improve the current traffic condition. Expo Road has been elevated at the intersection of Al Asayel Road over an 800-metre stretch, forming a bridge of 6 lanes in each direction. Two other bridges extending 1 kilometer have been built to link Expo Road with the service road to ensure smooth traffic flow from and to the site of Expo.

RTA has developed a plan addressing the needs of hosting Expo 2020 with the aim of ensuring smooth mobility for visitors of Expo. Works undertaken included upgrading roads and intersections, Route 2020 for extending Dubai Metro Red Line, and improving public transit networks, including buses and taxis.