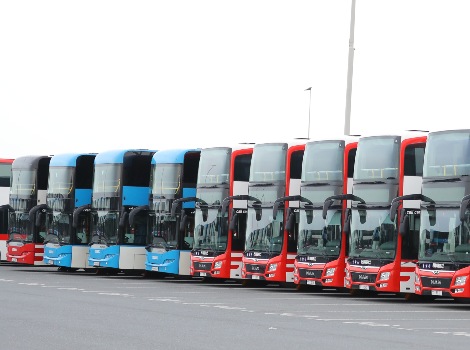 As part of the National Sterilisation Programme jointly undertaken by the Ministry of Health and Prevention and the Ministry of Interior to sterilise all public transport means and facilities, Roads and Transport Authority (RTA) has completed the sterilisation of all 47 Dubai Metro stations, 79 metro trains, 11 tram stations and 11 Dubai Trams.

RTA has also completed the sterilisation of 1,372 buses and work is currently underway on sterilising five bus depots and 17 bus stations. Furthermore, the sterilisation covered the entire fleet of Dubai Taxi, limousines and shared transport (smart rental) operating in Dubai, which exceed 17,000 in number.

His Excellency Mattar Al Tayer, Director General and Chairman of the Board of Executive Directors of the Roads and Transport Authority (RTA), said RTA is working to implement the directives of the leadership to ensure maximum levels of prevention and community protection. In cooperation with various stakeholders, RTA has ensured the highest safety and security standards in its efforts to safeguard public transport users, HE Al Tayer said.

Al Tayer further said the Authority is working around-the-clock to implement the government’s instructions and follow the guidelines of the Ministry of Health and Prevention and the World Health Organisation, as part of its aim of ensuring the safety of all passengers and reducing the risks of the spread of the virus to zero per cent. He hoped the world will safely tide over challenges arising from the pandemic, noting that the UAE has intensified its preventive measures.

All precautionary steps taken by the Authority with regard to Dubai’s public transport are aimed at maintaining the health and wellbeing of all passengers across all modes of transport, including land transport, sea transport, the metro and tram. He noted that since a large number of passengers use public transport in the emirate, exceptional measures and the public’s cooperation are critical to overcome challenges and ensure measures adopted by the country’s institutions and authorities against the pandemic are implemented meticulously.

RTA deployed about 1,000 taxis of Dubai Taxis and franchise companies during the National Sterilisation Programme. All these vehicles have been sterilised.

RTA called on public transit riders to cooperate with supervisors deployed at stations, metro and tram carriages and drivers of public buses and taxis. Passengers are also urged to use personal protective equipment while riding public buses or moving around public areas.