(Al Mehrizi: nol Plus points will be increased to 3 folds for riders during the first week of November 2021) 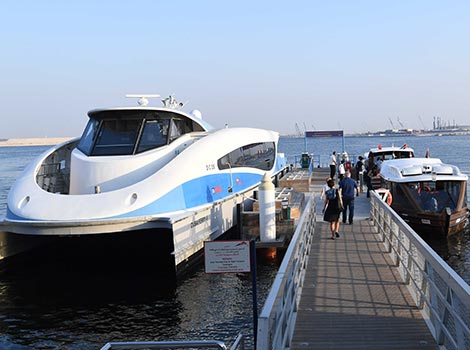 Dubai’s Roads and Transport Authority (RTA) announced the launch of the 12th Public Transport Day on November 1st under the theme: Together To Expo 2020 Dubai. The initiative aims to encourage Dubai residents and visitors to use public transport means in their daily travels, especially when visiting Expo 2020. Public transport means are the smooth and quick mobility option to go to Expo.  In line with RTA’s efforts to encourage the public to use mass transit means, nol Plus points will be increased to three folds during the duration of the campaign from 1 to 8 November 2021.

The Public Transport Day initiative, which coincides with the 16th RTA Anniversary, aims to promote Dubai’s efforts in improving the environment, achieving sustainable development, and encouraging riders to use public transport means through introducing them to the benefits of riding public transport means.

“In concurrence with the Public Transport Day, RTA is launching Art in Public Transport initiative in partnership with Dubai Culture. Through the initiative, we aim to support the cultural sector as it forms a key component of the UAE’s development drive. It enables innovators and educated people to contribute more initiatives and ideas that raise the profile of Dubai as a first-class cultural and innovative hub in the region and the world over,” said Rowdah Al Mehrizi, Director of Marketing and Corporate Communication, Corporate Administrative Support Services Sector, RTA.

“In early October, RTA launched the Photography Contest in cooperation with Canon Middle East, and in conjunction with the Expo 2020, via social media platforms. The contest aimed to encourage the public to use public transport to and from Expo site. Winners will be honoured in 3 stages. The first will be during the Public Transport Day. Stages 2 and 3 will continue until the end of Expo next year.

“RTA will launch, a challenge to be run via social media sites such as Tik Tok and Instagram Reel. It involves swiping the nol Plus card virtually in a challenge aimed to encourage the public to use public transport and go to several parts of Dubai to share their journeys with others.

“Events of the Public Transport Day include a treasure hunt competition through RTA’s website to encourage the public to use public transport. The competition prompts the public to discover a hidden treasure in public transport stations. The search is focused on the Dubai Metro Red Line and stations near Expo 2020 site. 8 winners will be selected and each of them will be rewarded with up to two million nol Plus points to be added to their nol cards to be used later,” she added.