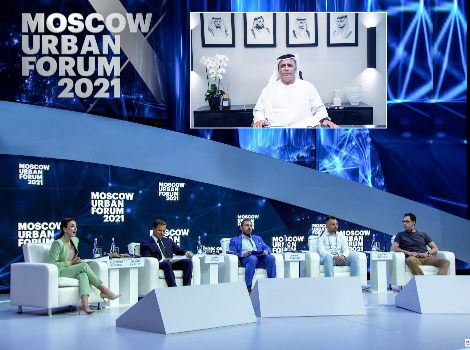 His Excellency Mattar Mohammed Al Tayer, Director-General, Chairman of the Board of Executive Directors of the Roads and Transport Authority, (RTA), Commissioner-General for the Infrastructure, Urban Planning and Wellbeing Pillar in Dubai, said that under the leadership of His Highness Sheikh Mohammed bin Rashid Al Maktoum, Vice-President, Prime Minister of the UAE, Ruler of Dubai, and follow-up of His Highness Sheikh Hamdan bin Mohammed bin Rashid Al Maktoum, Crown Prince of Dubai, Chairman of Dubai Executive Council, had made great strides in the transformation to a sustainable city. He pinned high hopes in migrating to a city that would serve people and improve wellbeing of residents through increased competitiveness and keeping up with future global trends in various fields.

Al Tayer made these remarks during a remote speech delivered at a keynote session of Moscow Urban Forum (MUF) hosted annually by the Government of Moscow. The forum is a global event that brings together governors of major global cities, and experts in urban planning, to discuss key topics with the leaders of the real estate sector across the world.

Attendees of the opening event included His Excellency Maxim Liksutov, Deputy Mayor of Moscow and Head of the Department of Transport and Road Infrastructure Development, Ms Violeta Bulc, former European Commissioner for Transport, and Mohamed Mezghani, Secretary-General of the International Association of Public Transport (UITP).

“Dubai Urban Plan 2040 revolves around the principle of sustainable transport. The plan concentrates on human-centric and sustainable mobility concepts through the creation of 5 main urban centres in the city and the adoption of a 20-minute city concept (to provide more than 80% of people needs within 20 minutes of walking or cycling). As such, integrated service centres will be developed in all Dubai zones with an emphasis on improving the standard of living, and increasing the population density nearby main transit hubs,” said Al Tayer.

“Over the last 15 years, RTA had undertaken roads and transport projects worth more than AED145 billion highlighted by constructing the Dubai Metro and Tram projects, beefing-up the public bus fleet from around 600 buses in 2006 to over 1700 buses in 2020, and increasing the cycling track network from 10 kilometres in 2006 to over 463 kilometres in 2020. We plan to increase the network to around 750 kilometres in 5 years, which will position Dubai among the top bicycle-friendly cities. RTA’s efforts contributed to positioning the UAE as the first globally in the quality of roads for five years in a row (2013-2017) according to the reports of the World Economic Forum,” he explained.

In his speech, Al Tayer reviewed RTA’s experience in delivering a portfolio of key infrastructure projects topped by the Dubai Water Canal project. “The Dubai Water Canal project was extremely complex as it had to pass under the central Sheikh Zayed Road corridor, the main highway of Dubai.  This meant that we had to construct the water canal under a live 8 by 8 lanes highway and the Red Line of the Metro and other main roads in an area with complete and massive networks of vital utility lines. Despite these challenges, the project was delivered on time,” he noted.

Al Tayer reflected on Dubai’s preparedness for hosting Expo 2020. “RTA has completed all the public transport requirements of the event. Accordingly, RTA is operating the 15 km metro link (Route 2020) extending up to the site of Expo 2020 including the construction of 7 stations to serve a host of surrounding developments. These projects will ease the arrival of visitors to the site of the event. The traffic movement to and from the site of the Expo will be managed by the Enterprise Command and Control Centre, one of the biggest, latest and smartest control centres worldwide. It uses high technology to control and command various transport means of RTA, besides managing 30,000 car parks at the expo site,” elaborated Al Tayer

Rounding up his speech, Al Tayer noted that accelerated demographic growth would require improving the quality and efficiency of the urban infrastructure and services. “It also requires migrating to a smart and sustainable city that uses the latest technologies, information and digital means to improve the quality of living in the Emirate,” he remarked.