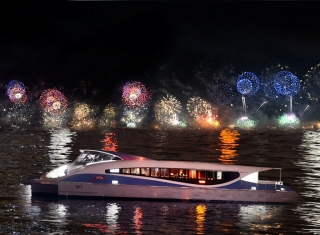 The Public Transport Agency, Roads and Transport Authority (RTA), is gearing for the launch of special offers and a host of excellent marine transit services aboard the Water Bus, Water Taxi, Dubai Ferry and Abra on the New Year’s eve (Thursday Dec 31st 2015). The step is part of RTA’s keenness to partner with community members of various nationalities as well as visitors & tourists descending on Dubai from all corners of the globe in celebration of this annual showpiece.

“This service is offered in the context of RTA’s seamless communication with customers,” said Mansour Rahama Al Falasi, Director of Marine Transport, RTA. The RTA is mobilizing its efforts to offer a new marine transit experience availing riders a superb opportunity to live the thrilling moments of festivities held by Burj Khalifa, Burj Al Arab and the Atlantis at the Dubai Water Front through sea cruises aboard marine transit modes. The experience is bound to leave fond memories for residents, visitors and tourists.

Journeys of the three marine transit modes (Water Bus, Water Taxi and Dubai Ferry) will start at 10 pm and end at 1 am (past midnight). Abras will offer services from 11 pm and end at 12 pm (after midday of the following day). The Water Bus kicks off from Marine Terrace Station (Dubai Marina) and heads to the Assembly Point nearby the bridge of the Palm Jumeirah. The fare is AED100 per persons, with 50% discount to children, and free tickets for infants less than 2 years.

Water Taxi trips will start from Marina Promenade Station (Dubai Marina) to the Assembly Point nearby Burj Al Arab. The Water Taxi can be charted by an individual, family, or group of friends not exceeding 10 at a rate of AED3,000.

Dubai Ferry will run services from the Marina Mall Station (Dubai Marina) to the Assembly Point nearby Burj Al Arab. Tickets are sold at AED200 for Silver Class, and AED300 for Gold Class, with 50% discount to children, and free of charge for infants less than 2 years.

Abras will offer journey from the Dubai Festival City Station to the Dubai Creek at a rate of AED25 per person.

“RTA would wish to avail this opportunity to share with celebrators of the jubilant festivities marking the New Year. Dubai would be turned out for the first time in a festive gear free from inland traffic congestions & crowds in places like the iconic Burj Khalifa; the tallest building in the planet. The service reflects RTA’s excellent marine transit services for the day, and its attention to raising the satisfaction of customers and riders of these modes,” added Al Falasi.

“The Dubai Ferry, Water Bus and the Water Taxi have special appeal to Dubai residents, visitors and tourists thanks to the picturesque beaches of the city, which also boasts of an array of fabulous tourist icons such as the World Islands, Nakheel islands among other tourist destinations and deluxe hotels. The launch of this quality service will add a further momentum to the marine transit modes during the event,” added the Director of RTA’s Marine Transport.