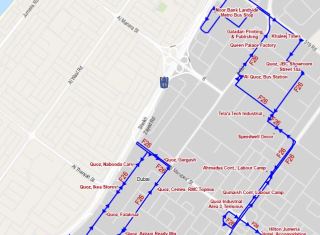 The Public Transport Agency, Roads and Transport Authority (RTA), is launching a new bus route (F26) on November 1st 2015 with the aim of adding to the happiness of people, and meeting the rising demand for this service. Public buses are key pillars of public transit means in Dubai, beside the metro, tram and other marine transit means.

“The launch of this new route on November 1st is a quick response to the needs of mass transport riders, and fits well with the booming economic activities in the Emirate; which is part of the upswing witnessed by the UAE at levels,” said Engineer Adel Mohammed Shakri, Director of Planning & Business Development, RTA Public Transport Agency.

“Route F26; a metro stations feeder service, starts from the bus stop nearby Noor Bank Metro Station and runs through the Interchange 4, Umm Suqeim Road. It serves all districts of Al Quoz Industrial Areas 1, 2, and 3 and passes through the First Gulf Bank Metro Station, residential quarters of National Cement Company, and other key geographic landmarks in the area,” stated Shakri.

The Director of Planning & Business Development reiterated the keenness of the RTA to widen and improve the public transport network to cope with the demographic expansion seen by the Emirate of Dubai. “Public bus routes are one of the key strategies of raising the number of journeys made by the public transport means through attracting more riders from various community members to use these means in their daily mobility. Such a transition promises to have positive impacts on the traffic movement and the cleanliness of the environment. Increasing the ridership of public transport means will ease the traffic congestion, minimize road accidents, raise the traffic safety level, and significantly diminish the environmental pollution caused by exhausts of the massive numbers of vehicles.